Home » About Us » Our Feast Day

Nativity of Our Lord 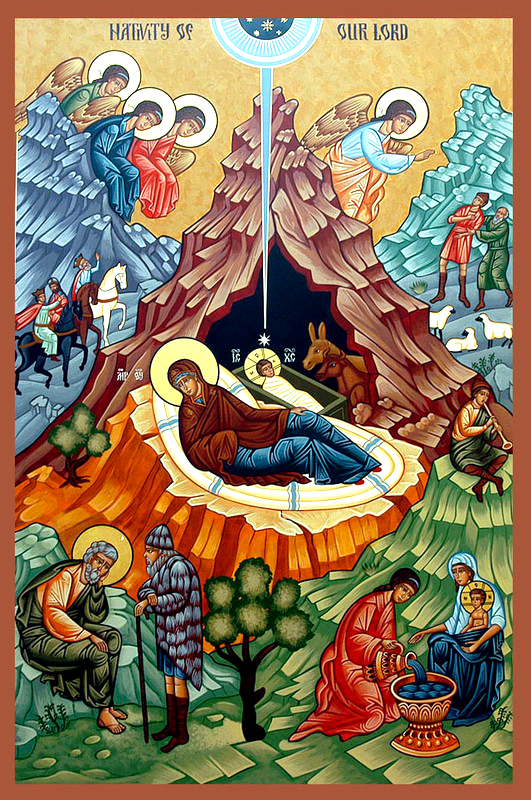 The Nativity, according to the flesh of our Lord, God and Saviour Jesus Christ, also called Christmas, is one of the Great Feasts of the Orthodox Church.

In the fullness of time, our Lord Jesus Christ was born to the Holy Theotokos and Virgin Mary, thus entering into the world as a man and revealing Himself to mankind.
According to the Bible and to Holy Tradition, Jesus was born in the city of Bethlehem in a cave, surrounded by farm animals and shepherds. The baby Jesus was born into a manger from the Virgin Mary, assisted by her husband St. Joseph. St. Joseph and the Theotokos were forced to travel due to a Roman census; the odd location of the birth was the result of the refusal of a nearby inn to accommodate the expecting couple (Luke 2:1-20). Since it is known historically that dwellings were built directly over such caves housing livestock--in order to make use of the heat
Though three magi from the East are commonly depicted as visiting during the event itself (or, in Roman Catholic tradition, twelve days thereafter), the Bible records the coming of an unspecified number of wise men as being a few years after Jesus' birth (see Matthew 2). In either case, these magi came bearing gifts of gold, frankincense, and myrrh (Matt 2:11). In the hymnography for the feast, these gifts are interpreted to signify Christ's royalty, divinity, and suffering.

Feast Day Nativity of our Lord

Your Nativity, O Christ our God,
Has shone to the world the Light of wisdom!
For by it, those who worshipped the stars,
Were taught by a Star to adore You,
The Sun of Righteousness,
And to know You, the Orient from on High.
O Lord, glory to You!

Today the Virgin gives birth to the Transcendent One,
And the earth offers a cave to the Unapproachable One!
Angels with shepherds glorify Him!
The wise men journey with a star!
Since for our sake the Eternal God was born as a Little Child!